Why do PCs Still Require a CMOS Battery Even Though They Run on Electricity?

Is this the absolute dumbest headline ever?

Big congratulations to my son Ken, who just gained his Private Pilot’s Licence.

Ready for the Rush Hour

can you spot the triplets?

We visited a park in Jiading today to see the Wisteria. Unfortunately, so did several thousand others. This was the only worthwhile shot that I got of the blooming plant.

Steve Denning reveals how clueless he is about Google+… again!

Pro tip: If you want serious traffic to your column, say Google+ is dead. Your page will be hammered by hoards of passionate Google+ fans who come to disagree with you.

It’s a lesson Steve Denning learned for his first “Google+ is dead column,” so now he’s back for another helping of Google+ traffic in his latest missive, called “Has Google+ really died”?

(I’m not criticizing Denning – yet! – I myself drive huge traffic from Google+ to my own columns. That’s because Google+ is very much alive.)

Anyway, Denning launches into a defense of his first column, but succeeds mainly in demonstrating a profound ignorance about Google+.

Here’s what Steve Denning got wrong:

Denning is relying on a spectacularly useless metric for defining active use, which is public posting (by relying on the Stone Temple Consulting report)

It doesn’t take into account the default kind of post, which is non-public. A huge number of users have stage fright about posting publicly, and a probably even huger number don’t know their posts are public. (If you want to criticize Google+, here’s one criticism you can levy – the whole Public vs. Circles posting issue is confusing to new users.)

It doesn’t take into account people who mainly “consume” content without commenting much, even though they feel they’re active users of Google+.

2. Trying to have it both ways on the accidental “users.”

Denning again goes astray by relying on Stone Temple’s skewed messaging on their report. Yes, when you get a Google password for some other Google property, that counts as a Google+ account. So most of the 2.2 billion Google users aren’t really Google+ users in actual fact. They then go on to use “randomly selected” profiles knowing full well that most of these are non users.

You can’t have it both ways. Either they’re users to be counted as users, in which case Google+ is vastly bigger than Facebook – or they’re non users, and not to be counted in numbers about how active the average “user” is.

3. Failing to appreciate the nature of the Google+ “cult.”

Denning points out that many comments on his first column “seemed to resemble that of people defending a struggling religious cult, rather than the users of a mere software tool.”

The gratuitous word “struggling” is passive-aggressive spin to support his narrative. But the point is well taken. Google+ people sound like a cult. Just like Apple fans. Or Android fans. Or Reddit users.

In fact Apple is a perfect comparison. Apple has less than 7% of the global PC market. Does anyone say Apple’s PC business is “dead”? No, because they have the highest-quality PCs and laptops and the highest-quality customers (in terms of income and education levels) – exactly like Google+.

Nobody likes to hear me say this, but Google+ is the Apple of social networks. (Actually, I think Guy Kawasaki was first to say something like this.)

It’s not a place like Facebook for grandma to post cat photos. And it’s not a place like Twitter for people to speak in hashtag code and URLs. It’s the only place where you can pursue your passions will brilliant, like-minded people who are truly interested in the same things you are.

Yes: Google+ is a “cult.” Only the highest quality tech products produce “cults."

Denning trots out a smattering of Google+ hater headlines to provide “evidence” for the “emerging consensus” about Google+. (And check the numbers: Those articles got HUGE traffic from the Google+ “cult,” too.)

As I’ve said many times, the press hates Google+ precisely BECAUSE it’s not a ghost town. Any post on Google+ by a prominent writer will be greeted by long, well thought-out criticisms, challenging the writer’s assumptions and calling the writer out for mistakes. Google+ isn’t easy and breezy for public writers like Twitter and even Facebook are.

This is the last thing a journalist wants after writing and editing all day.

What the tech press wants is Twitter, where they can dash off quick and clever lines off the top of their heads (like this one: https://twitter.com/MikeElgan/status/591584837347061762 ) that will be neither challenged nor heavily discussed.

That’s why the tech press feels so threatened by Google+. There’s too much going on: too much argument, too much to read. And so they’ve been out to kill it from the beginning.

Denning quotes more Twitter-loving echo chamber journalists who assume Google spinning off things like Hangouts or Photos would be evidence for neglect and decline. (These are the same kind of journalists who said that Google moving Glass into its own product group meant that they’re killing it.) It’s all just wishful thinking by Plus haters in the press.

Fact is, the unnatural integration of everything years ago was just a strategy Google was trying. It didn’t have the desired effect, honked off a bunch of people who didn’t want things to be integrated, so now they’ve changed the strategy.

The experience of using Google+, and the benefits, haven’t changed one bit. (In fact, It would be improved by further de-coupling, specifically if YouTube and their trolls were surgically removed.)

6. Pretending to have tried Google+.

Denning says his “own efforts to love Google+ were unsuccessful.” Looking at his profile, I see that he’s posted publicly twice ever, hasn’t even filled out his profile or even uploaded a profile banner pic. Running a search, I see that he doesn’t engage with comments or communities.

Steve Denning is a non-user. He has NOT made an effort to love Google+. I imagine if he had only posted two tweets on Twitter, he wouldn’t understand that social network either.

And this item is related to….

7. Completely failing to understand Google+ fan opposition to yet another non-user saying Google+ is dead.

Denning is making the mistake of publically making the same mistake many people have before. As I’ve pointed out many times, you cannot understand the power and the glory of Google+ unless you really use it.

Denning is just another Arthur Spooner:

Denning and other Arthur Spooners are confused about why Google+ fans have an issue with this phenomenon. And so I’m going to make it so clear that nobody who reads this can retain their confusion. Here goes.

1. Google+ is the best social anything ever.

2. This can be only understood if you’re truly active on G+ for weeks or months.

3. Influential writers who have not taken the time to understand have slammed Google+ from a place of ignorance.

4. Because this has been repeated so many times, many, many people think Google+ is “bad” in some way.

5. Bottom line: Ignorant people are the biggest threat to Google+, and are hurting the reputation of best social anything ever.

Is that clear enough?

8. Failing to appreciate the importance of Google+ for Google itself.

Google isn’t going to kill Google+ because the site provides huge benefits for the company.

First, Google+ is a necessary social component for Google’s wearable computing platforms – you know, the future of computing?

Google+ is a great platform for Google employees, engineers and executives to brainstorm, announce things, and learn about their most passionate fans and users. (Where else would they do this, Facebook?)

Google+ is still useful for cultivating the most passionate fans of Google itself, as well as Android. Google+ puts the “cult” in cultivating. Google would be insane to cut their most loyal, passionate and enthusiastic users off at the knees.

In a nutshell, Steve Denning is just plain wrong about Google+.

The Colour of Spring

*The Party is Over *

We all had to start somewhere.

The Faraday Porteur e-bike can finally be yours for $3,500

I don’t quite get this. Yes, they’ve done a great job cramming all that tech into a standard bicycle format. But, isn’t the point of a bicycle that you power it yourself? If you want self powered two wheeled vehicle, don’t you just buy a scooter or motor bike?

I can go into my local supermarket (seriously) or one of several bike shops within a five minute ride from where I live and buy an e-bike for under $500. Not only that but it will have about three times the range of this e-bike. It might not have the hipster cred of this, but it will be infinitely more practical.

I do get that the research into the miniaturisation of the technology will have future benefits for e-transport, but, as a product, this is pointless. 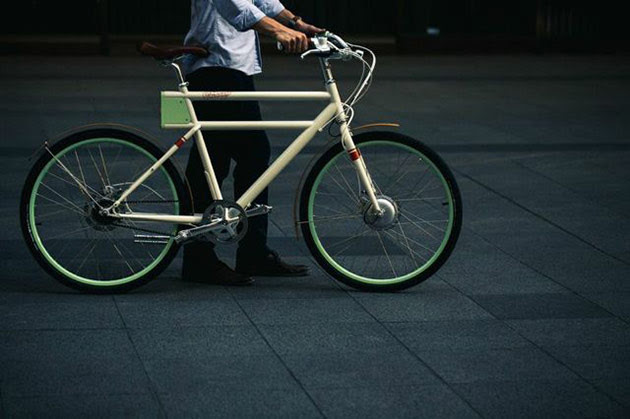 I’ve been playing around with the PHHHOTO app. It’s not without its issues, but fun never-the-less.

(I know, I should have posted this comment yesterday - :-) )